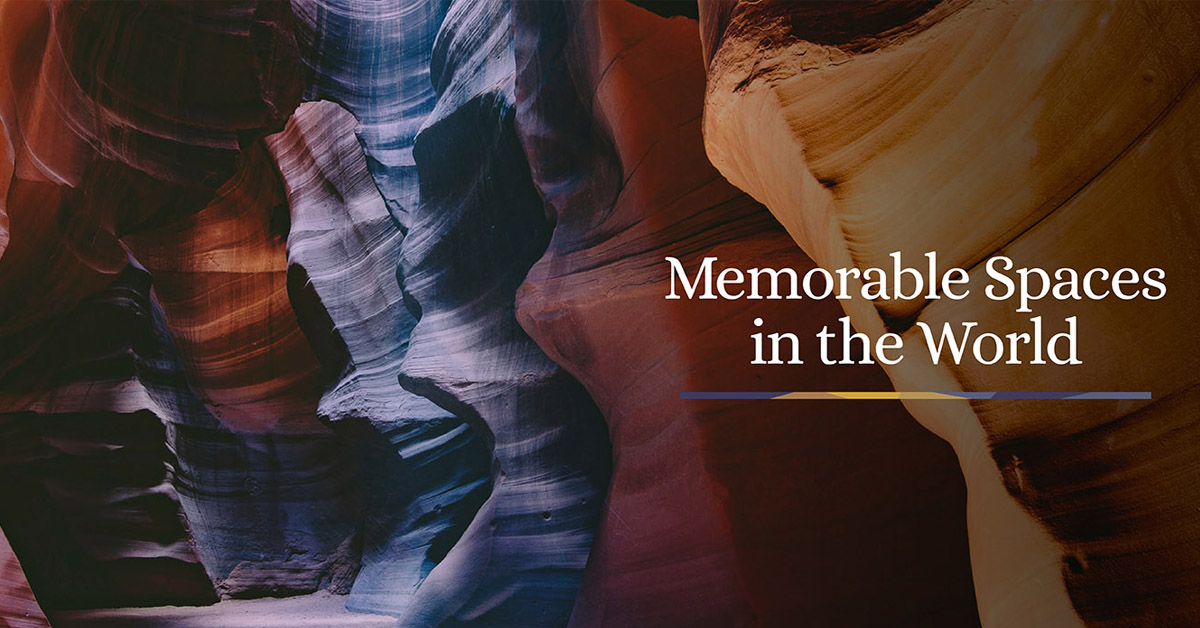 Icy glaciers, staggering mountains, blue oceans, green valleys dotted with wild animals: We live in a beautiful, big world filled with remarkable spaces. A space that’s memorable doesn’t necessarily need to be intricate – it could be as simple as a Gulmohar tree with a backdrop of the sky. What it needs to be is; meaningful. A memorable space defines memorable moments in our lives. Why do you remember the hallways of your high school or the leaning tower of Pisa? It’s because the space has left a lasting impression on your senses. The details, the colour scheme, the time, the people are etched in your mind. You can transport yourself back in time to those moments in those spaces because of the finer details.

Pointing out all the awe-inspiring natural wonders in the world would take a lifetime so we’re going to cover 10 of the greatest hits!

The Antelope Canyon is located in Arizona which is home to one of nature’s most wondrous creations – the slot canyon. It’s carved from the red sandstone for millennia by seasonal flood rains and wind, as a result, the canyons contain a narrow passageway that leads several hundred feet away from the mouth. The sloping angles of the rocks paired with shifts of light make the passageway breathtaking and memorable.

Here’s how to book your trip to The Antelope Canyon

This iconic Bamboo forest in Kyoto is one of the most serene places to visit during your travels in Japan. The graceful bamboo pillars stretch up to the sky, whispering back and forth in the cool wind, illuminated in the soft morning sunlight. The beauty of the emerald bamboo grove captures not only the attention of camera-clutching travelers but also Kyoto’s best artisans who handcraft souvenirs and everyday items from this versatile wood. What’s memorable is standing in awe of the peaceful beauty of the forest’s surroundings.

This surreal white travertine terraces built over the millennia from limestone deposited by the abundant hot springs is truly breathtaking. The geological phenomenon that is Pamukkale, literally “Cotton Castle” in Turkish, is also the site of the remarkably well-preserved ruins of the Greek-Roman city of Hierapolis. With such a unique combination of natural and man-made wonders, it’s little wonder that Pamukkale-Hierapolis has been made a Unesco World Heritage site. With over two million visitors annually, it is also Turkey’s single most visited attraction.

Dongchuan Red Soil is located on the northeast side, more than 200 km away from Kunming City. The red soil developed under the high temperature and rainy conditions in Dongchuan, Yunnan, is rich in iron and aluminum, with little organic matter, strong acidity, and heavy clay. This area boasts the most typical and featured red soil in Yunnan highland. Experts regard it as the second marvelous red land in the world following the one in Rio Brazil.

Tianmen Shan is counted among the very few naturally formed arches with a precise known date. The total span of the Tianmen Shan is about 55 meters with a height of about 130 meters. The document of “Three Kingdoms” mentions that Tianmen Shan was formed as a result of a cataclysmic event in 263 AD. The Heaven’s Gate Mountain is the common name of Tianmen Shan – it’s arched cave is a perfect example as one of nature’s memorable crafts. The locale of the cave is formulated through a karst syncline.

Tianmen Shan is counted among the very few naturally formed arches with a precise known date. The total span of the Tianmen Shan is about 55 meters with a height of about 130 meters. The document of “Three Kingdoms” mentions that Tianmen Shan was formed as a result of a cataclysmic event in 263 AD. The Heaven’s Gate Mountain is the common name of Tianmen Shan – it’s arched cave is a perfect example as one of nature’s memorable crafts. The locale of the cave is formulated through a karst syncline.

06. The Valley of Flowers, Uttarakhand

The Valley of Flowers is a beautiful national park reposing in the West Himalayas. Nestled in Uttarakhand, this alluring place is famous for its charming meadows of alpine flowers. Endowed with a diverse range of endemic flora, it is picturesque in its beauty. This lush region is also home to some rare and endangered animal species. You may spot animals like Asiatic black deer, snow leopard, musk deer, red fox, brown bear and blue sheep. One of the most memorable treks said to exist in all of India!

How to get to the Valley of Flowers

The world-famous Waitomo Glowworm Caves have been guided since 1889 and occupy a high place in the New Zealand holiday wish-list. As you row silently by boat through the Waitomo River, you stare at thousands of illuminating glowworms in utter awe. Many of the current guides are descendants of the Maori chief who originally explored the cave and they share the remarkable history of this area with you in detail. As you enter this galaxy of tiny living lights, you’ll immediately experience a serene ambiance and marvel at Mother Nature’s memorable light display.

This park is formerly called Uluru (Ayers Rock – Mount Olga) National Park, features some of the world’s most spectacular geological formations that dominate the vast red sandy plain of central Australia. Uluru-Kata Tjuta National Park expands across more than 327,414 acres of Australia’s desert outback and is home to these two iconic rock formations. Uluru, a massive monolith, stands 348 m tall and is 9.4km circumference and the highest of the 36 rock domes of Kata Tjuta is 546m high. These rocks form a large part of the traditional belief system of one of the older human societies in the world – The Anangu Aboriginal people.

The bright dancing lights of the aurora are actually collisions between electrically charged particles from the sun that enter the earth’s atmosphere. The lights are seen above the magnetic poles of the northern and southern hemispheres. In the North, they’re known as ’Aurora Borealis’ and ‘Aurora Australis’ in the south. These lights appear in many colours – however, pale green and pink are the most common. Shades of red, yellow, green, blue, and violet have also been reported in the past. The lights appear in many forms from patches, to scattered clouds of light to streamers, arcs, rippling curtains or shooting rays that light up the sky with an eerie yet memorable glow.

Learn more about The Northern Lights

If you visit Bolivia, the Salar de Uyuni (aka the Bolivian Salt Flats) is on your must-see list. This is the world’s largest salt flat and is truly an amazing sight to behold. Salar de Uyuni, which when translated means, “salt-flat at Uyuni”, is quite unique. This Bolivian salt-flat plays an important role in both the economy and the environment of Bolivia as well as being a visually memorable and stunning destination.

Learn more on Salt Flats around the world